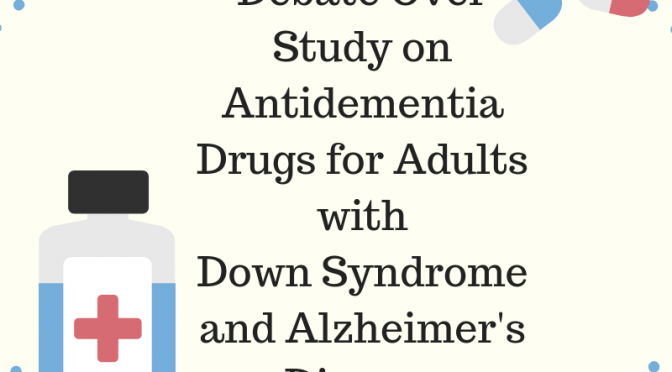 In March 2018, 21 researchers published a study in the British Journal of Psychiatry called “Impact of cholinesterase inhibitors or memantine on survival in adults with Down syndrome and dementia: clinical cohort study.”

Aims: To investigate the effect of cholinesterase inhibitors or memantine on survival and function in adults with Down syndrome and Alzheimer’s disease.

Difficulties of diagnosing and managing dementia in people with Down syndrome

“As practicing clinicians who provide care to adults with Down syndrome, we appreciate Eady and colleagues’ attempt to address a real concern in this patient population. However, we have significant concerns about clinicians potentially using in their practice the conclusions drawn by the authors. The study conclusions offer false hope and may result in wasted resources.”

Smith and Chicoine take issue with several aspects of the study:

1. There are major differences in two groups (those who did/did not receive the medications) involved in the study. Smith and Chicoine argue that the significance of the differences, including age, degree of intellectual disability, and progress of dementia symptoms, could make the results invalid.

2. The study measured the survival time of the participants. (Those who took the medication survived an average of 2 years longer than those who did not.) Smith and Chicoine suggest that quality of life would be a better measure to investigate.

“Dementia takes a tremendous toll on the caregivers and families. Even if the medications do extend life, where is the benefit? What kind of life will they have?”

3. Smith and Chicoine point to previous studies that they claim show there is “no benefit of pharmacological interventions for cognitive decline in people with Down syndrome.”

The original study’s authors reply to Smith and Chicoine in the November journal. In it, they defend their procedures and results. They argue that medications have been shown to slow the rate of cognitive decline in patients without Down syndrome and reiterate the need for more research in this area.

Their final statement: “People with Down syndrome and dementia should not be denied access to antidementia drugs.”

It should be noted that Smith and Chicoine did not argue against the use of antidementia drugs in all cases. They merely took issue with the study’s design and argued for careful evaluation prior to an Alzheimer’s diagnosis in adults with Down syndrome.

This site uses Akismet to reduce spam. Learn how your comment data is processed.